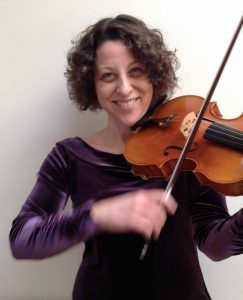 Violist
Jessica Baum studied music at the Eastman School of Music, where she earned her Bachelor's and Master's degrees in Viola Performance. She began her intensive study of music in high school at the Interlochen Arts Academy, where she received a Fine Arts Award for Superior Performance and was a finalist in the annual concerto competition. Jessica has studied viola with Andrew Kohji Taylor, John Graham, James Dunham, David Holland and James Van Valkenburg, and klezmer viola with Alicia Svigals.

She has attended several music festivals including The Quartet Program (directed by Eastman professor Charles Castleman), Aspen Music Festival in Colorado, the Baroque Performance Institute at Oberlin, and Klezkamp (a klezmer workshop in the Catskills). While at Eastman, Jessica co-founded the Flying Hair Klezmer String Band, which performed throughout Rochester and was featured on two CD's and a radio broadcast. Jessica's master's recital at Eastman included klezmer, baroque, classical, and modern selections. She has worked as a freelance musician in Rochester, NY and Boston.

Jessica also earned a Master's degree in Physical Therapy from Boston University. She has worked as a Performing Arts PT for ARTS at Boston Conservatory at Berklee and the Berklee College of Music, as an Orthopedic PT at Boston Medical Center, and with performing artists at the Walnut Hill School and New England Conservatory.

Jessica lives in Lexington with her husband and two children, who attend Lexington Public Schools. She is also a member of the Longwood Symphony Orchestra.
.