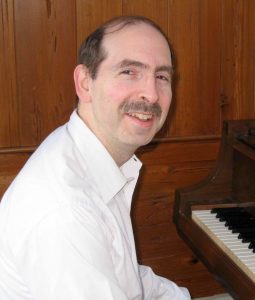 Pianist
Daniel Goodman is well known to Boston musical audiences for performances on piano, cello and accordion. He enjoys performing concerts which include classical piano repertoire and improvisations on themes suggested by the audience performed in classical, folk and jazz styles. These concerts have been sponsored by organizations at MIT and scientific societies as well as local churches and synagogues. His concerts have raised funds for worthy causes including Cradles to Crayons, the Lexington Food Pantry, Mazon: A Jewish Response to Hunger, the MetroWest Free Medical Program and the Lexington Pops Chorus.

In the 1980’s, Dan was the musical director, and toured with the Mandala Folk Ensemble, performing international folk dance and music throughout New England. In the 1990’s he founded Neshama, a band that performs klezmer, jazz and folk music. Dan appeared as the accordionist in the 1991 film "Once Around" starring Richard Dryfuss. Together with colleague Jack McCreless, Dan has performed repertoire for piano and narrator in public concerts and for local schools. Their CD recording, “Crocodiles and Other Tales,” is an accessible introduction to 20th century music for families with children, and includes music written for them by Lexington composer John Tarrh.

As a cellist, Dan has performed with many local orchestras. An avid chamber musician, Dan considers spending time at the Apple Hill Chamber Music Center in Keane, NH to be the highlight of his summer. His story of combining careers in music and science is the subject of a chapter in the 2009 book, "In their Own Words – Pianists of the International Piano Society," by Raymond Smullyan and Peter Bispham, and a chapter in his recently published book, "Find Your Path - Unconventional Lessons from 36 Leading Scientists and Engineers."

Dan studied science and music at Princeton University and MIT. He was principal cellist and piano soloist at both schools. His teachers have included Frederick Marvin, Robert Black and Randall Hodgkinson. He has won musical awards including the Curran Scholarship, and the Central NY and MIT concerto competitions. Dan received a Ph.D. in Physics from MIT in 1989.   He is currently Director of Advanced Technology at ASM-NEXX of Billerica, MA and lives with his wife in Lexington.